Kindly note that I have moved my website and blog and I will no longer be active here. Please visit my new website.

A string is a sequence of symbols from a set called an alphabet. If the string is circular, one can start reading it from any position/index. For example, consider the following circular string of length 8:

Thus, if two different strings result in the same least lexicographic rotation, they essentially represent the rotations of the same circular string.

The motivation to study the problem of computing the least lexicographic rotation (LLR, henceforth) of a string comes from many different application domains.

We get a rotation if we start from an index, say i, go up to the end, start from 1, and stop at i-1. Note that all the rotations of the underlying circular string can be obtained from the given string (by starting from each index). Here, “aabbabab”  starting at index 2 is the LLR.

Further note that LLR of a given string (and thus of the underlying circular string) is unique even though it may start from more than one indices. Take the string “baabaa” for example – the LLR is “aabaab” but it starts from index 2 and index 5. In general, if a string is periodic (i.e. of the form x<sup>n</sup> where n ≥ 2) then it will have several (decided by n) indices giving the same rotation and thus the same LLR. As a consequence, a non-periodic (that can not be expressed as a power of a shorter string) will have the unique index for its LLR.

Naively, we can sort the successive rotations to find the LLR. For a string of length n, if we use bucket-sort algorithm, the naive approach will require O(n²) time in the worst case.

In 1983, an efficient algorithm was proposed by Duval that runs in O(n) time and requires constant memory space. Working of the algorithm can be understood easily, by following the description of the steps given below: 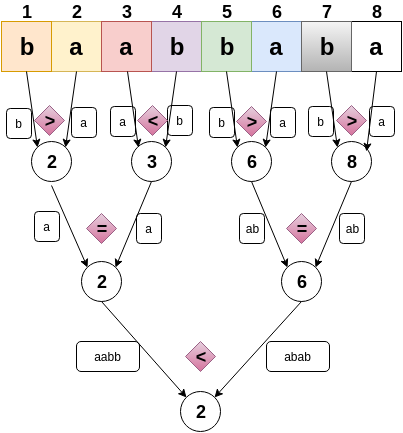 Iteration 3: The substrings of length 4 (6-2 =4) starting at positions 2 (aabb) and 6 (abab) are duelled in this step. As aabb < abab, 2 is the clear winner. We stop here as there are no indices left to duel and the final winner has been chosen.

Thus, the LLR is the rotation starting at index 2 i.e. “aabbabab“.

Correctness of the algorithm

Consider that we are comparing two indices, say i and j. 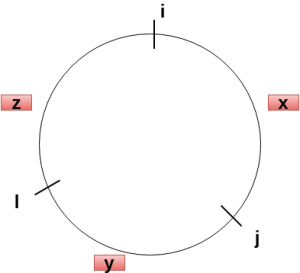 Now there are only the following possibilities:

This completes the proof of the correctness of the algorithm.

Following is the paper in which the algorithm was proposed:

Please pardon the verbosity and oversimplification of the algorithm. This post is more pertinent to graduate students. It is not intended for a connoisseur of string-algorithms. 🙂

"The woods are lovely, dark and deep.
But I have promises to keep,
and miles to go before I sleep."
- Robert Frost